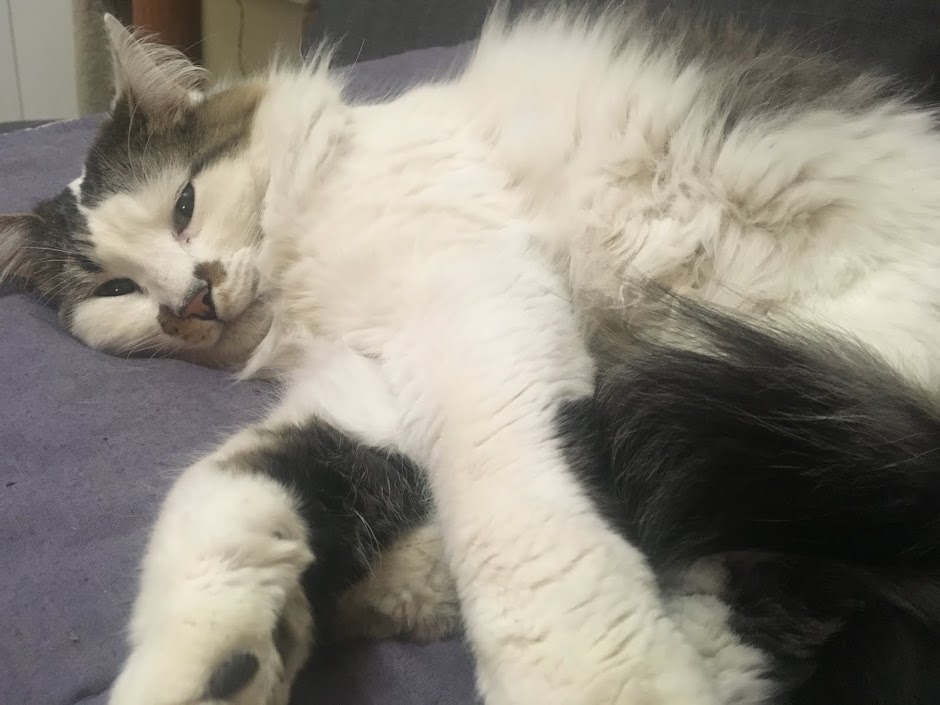 On the Hundred Mile Diet

Sometimes on Twitter you can run into a conversation between other people partway, and because it's public, it's possible to weigh in on the matter at hand. Someone I follow was having a conversation with someone about shopping at Wal-Mart, but I didn't see that, and the other person said something about how farming practices on Vancouver Island make the 100-mile diet unlikely (I can't remember her words exactly).

Now this is someone who I once followed on Twitter, and who once presented a workshop I attended. On seeing that her values are not in line with my own, I stopped following her, but I can see (based on the Wal-Mart conversation when I went back to look at it) that she is someone who is fully in the fold of our modern consumerist society and doesn't really get the whole local food thing.

I tread carefully here, because while I'm on a soapbox, I also don't want to be too critical. My friend's part about Wal-Mart was that if you have to use it, it's a good thing that it's there, but we do have a choice. And despite that the ultra-low wages of Wal-Mart employees have been in the news lately, and that outrageous statistic that something like more than half their employees are on food stamps, I would argue that there is a portion of Wal-Mart customers whose attitude is of "I don't care about them, I have to feed my kids".

But the equation is not that simple. Everything we do is a choice. We weigh our choices as a consumer based on our values. What is important to you? There was another study arguing recently that organic food is not significantly more nutritious than conventionally grown food. To base ones choices on whether to buy organic on this single point alone, I think, misses the point entirely. Conventionally grown food uses all kinds of herbicides, pesticides, hormones and all manner of chemical to force food to grow in a sterile environment. I would bet money that if the farmers in the prairies stopped using chemical on their fields, the incidence of asthma in those provinces would be reduced by half. Another point: tons of fossil fuels are used so that we can have Peruvian asparagus in November, and tropical fruits year-round. I went to a grocery store in Cobble Hill earlier this year, passed a handful of cattle farms on the way to the grocery store and they had no local beef, only beef imported from Australia. How does this make any sense?

So I decided not to engage in conversation with this woman on Twitter. I didn't feel like I had the energy to have that conversation and I didn't think it was worth my time to educate her. People don't like being preached to. I don't even know what she meant by "farming practices" on Vancouver Island, but goodness, it sounded like she wanted bananas to grow on the Saannich Peninsula. I commented about the farming practices she referred to, saying that it's not just farming practices, but the kind of diet we have gotten used to. Her reply: "I agree. I prefer fresh out-of-season veggies to preserved local most of the time". GACK!! I was not supporting her in the argument! I dropped the conversation at that point.

I have, since late summer, been reading a number of books about growing food, food preservation, self-sufficiency, permaculture, self-reliance, and more or less being prepared for the decline of our current way of life. Between climate change, energy decline (as in the decline in the extraction of fossil fuel resources from the earth), and the current economic situation in the world (which I believe will never "recover" as the economists would have it), I think it is important, for me at least, to prepare for a life of not finding things at the grocery store, or not being able to afford what is offered there.

Our modern way of life is not sustainable. It's only in the last century that we have even been able to get out-of-season veggies in the grocery store whenever we want them. That is only made possible by cheap fossil fuels. The point I was trying to make to this woman is that the 100-mile diet is possible on Vancouver Island, we just have to change the way we eat, which includes putting food by and eating from the pantry. This doesn't mean we can or even should grow it all ourselves - but I do feel that building relationships in our communities where we can trade or barter our goods and services for things we can't produce ourselves will become an increasingly important aspect of our lives.

(So much for not being critical. Just before I wrote this post, one of the bloggers I read posted this about the price of food in the store and being able to grow it yourself. Have a look!)
Posted by yarnsalad at 8:45 AM No comments:

Chicken in a kilt

Ok so in November I participated in a swap put on by LouiseJHunt of the Caithness Craft Collective podcast. This particular swap was for a handwritten letter and a handmade Christmas decoration.

I was paired up with my new friend Arlen, a Scot transplanted into Boise, Idaho. I didn't have much information to go on for what to make him, but I knew he was originally from Scotland and that he had a number of chickens. So obviously... 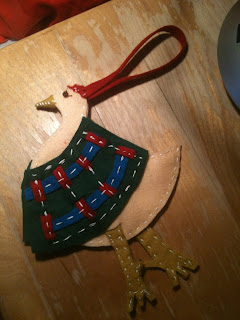 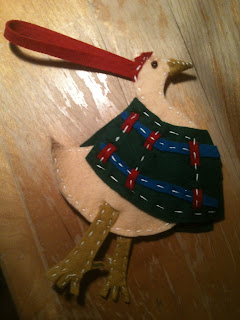 Because chickens wear kilts, right? Well, even with a quick Google search, I didn't find chickens wearing kilts, but really they should because, especially for hens, it would be good for them if they have a randy rooster that has his favourite girls who lose their back feathers with all the attention. Chicken sweaters are a thing, why not chicken kilts?
Posted by yarnsalad at 10:44 AM No comments:

I have a date!

I just need to fly to Montreal, stay the night with my brother-in-law who is attending McGill University, go to the US Consulate and present all the documents, and they will tell me "Yes that's great, we'll send your visa via courier tomorrow, you should have it by Monday".

Meanwhile, the week before, I will go to Surrey for the immigration medical exam with the only immigration doctor west of Ontario. I present records of my vaccinations and immunity, have blood drawn, a chest X-ray and the physical exam. My appointment there is on Friday January 18th, the documents for that will be available on the Monday afterwards - but I'm not going to stick around on the mainland for three days waiting for my papers - I'll arrange to have them couriered to me.

When will Dan come? We're working on details for that right now - he does need to make arrangements at work but we expect it will be the week after. There will, I expect, be a brief round of visits and then we will drive away, either at the very end of January or beginning of February. My immigration was approved in May, so this visit to Montreal is supposed to be just a formality, but they and the border could for some reason still deny me entry. I won't feel relieved until we are in Port Angeles.

With just a few days to Christmas, I am still not quite ready. I did send out holiday cards this year, which I seem to do one in every three years, give or take. I am also trying to observe birthdays (three of my family members have Dec 19 has their birthday, and there is also one on Dec 27) and renew my old habit of hand-written letters. In sending these cards and with holiday festivities, I have been reconnecting and spending time with a bunch of people I haven't seen in a while, and I have to say I just love getting together with friends, new and old, and hearing their stories. You just never know where life will take you, and hearing other stories leads me to reflect on my own journey. Despite my odyssey of this past year and a half, I do feel I have been blessed in a number of ways with all the interesting things I have experienced. When we heard that my interview date was for January 24th, we thought "that's later than we were expecting, but at least it's a date". It's next month. It's weeks away instead of months. So rejoice with me!
Posted by yarnsalad at 10:31 AM 2 comments:

Last Thursday we received notification that they have now received all our documents and my file has been sent to Montreal for processing. I should have my interview date within ten days.

Well, it's not bad news. We were hoping for our next correspondence from them to be the actual date of the interview, but it seems like they add three extra secret steps for every one we know about. So I should know before Christmas.

Now for some reason, I was given to understand that the US Consulate in Montreal takes a week or two or more off for the holiday season. I checked the website, not so! They only close for Christmas Day and Boxing day (December 26th).

Wouldn't it be funny if I had my interview the week of Christmas? Just think of how exciting it will be for me to arrange sudden air travel from Victoria to Montreal over the holiday season, not to mention interrupt time with my in-laws. That's Murphy's law or something, right?

Well, if it happens, it happens. I am open to whatever the Universe has in store for me. Once we get my interview date, Dan will book his flight and we will make our travel plans.